When looking at the Showings for CIR’s listings, this past week brought with it another increase in showings with a remarkable uptick of 172 showings for a total of 604 in the $300,000 – $400,000 price range. Perhaps the relaxation with the mortgage stress test combined with news of lowering interest rates sparked more interest in the markets. With the recent news in regards to the Covid-19 virus, the volatility in the stock market, as well as the rapid decline in oil prices, we will see what the next few weeks bring and what that will mean for the Real Estate markets. As of right now, the showings volumes are holding strong coming into Spring

The Real Estate Market has continued to show signs of strength coming out of February and into Spring.  With sales across the Province increasing by over 11% compared to last February, that brings the year to date sales slightly above the past five years average activity. This still remains below the longer ten year averages but continues to show signs of stability in most of the markets. While the inventory levels climb coming into the busier Spring markets, the sales have been strong enough to offset it in most markets, allowing the months of inventory to drop which is ideal for price stability.

The hot spots in the Province were in the Lethbridge, Grand Prairie, and Calgary regions.  According to the Alberta Real Estate Association, the surge in sales year to date of over 21.6% year over year in Lethbridge has surpassed numbers as far back as 2008! The listing inventory has continued to climb in as well, but it has not kept up the pace to sales, so the months of inventory has been dropping. This is a great sign for the area as we have been concerned about the rising inventory levels in the Lethbridge region, but buyer confidence seems to be strong in the area. The Grand Prairie markets appear to have picked up steam due to the recent downward pressure in prices, whether that area has hit bottom remains to be seen as inventory levels remain quite high. And finally, Calgary where the sales have continued to outpace the new inventory coming onto the market which has led to the largest drop in months of inventory across the Province.
The challenged markets through the first couple of months are the Central Alberta and Medicine Hat areas.  The Red Deer area continues to be challenged with a rising unemployment levels. The Medicine Hat markets appear to be more of an over supply issue where the inventory is outpacing the sales activity.
As for CIR, we are seeing the showing activity for CIR’s listings significantly increased in February over January jumping to over 6,200 showings. The high sales activity that we saw in the $300,000 – $400,000 range in February correlates with the above average showings in that range in January. We anticipate the same to happen in the move up markets in the coming months as a result of the higher than average number of showings in that range.

As a company, we have also experienced a significant uptick in sales. While Alberta had an increase of 11% in sales in February, CIR Realty had an uptick of 39% in February. We have been very happy to see that trend continue with an increase of 40% in the first week of March compared to last years numbers. While the numbers in 2019 were less than ideal, the numbers in February and March are the third best in the past decade.
There is a large degree of uncertainty in the world today which could end up slowing things down, but if these trends continue we anticipate a very busy Spring market. The necessity to understand the markets with in the markets continues to be so important in today’s Real Estate Markets. The “new norm” for markets requires an understanding of how to position a home into the marketplace based on the activity occurring in order to get it sold. Having a strategy, pricing the home properly with a compelling price, and keeping the home in ideal condition for the pricing strategy are all key components to a sale in todays markets.
-CIR Realty

This month saw a double-digit gain in sales, but last February was one of the slowest levels of activity since the late ’90s.

With the extra day this February, monthly sales total 1,197 units.  A combination of these two factors resulted in a 23 per cent improvement over last year, but sales remain well below longer-term trends and consistent with the lower levels reported over the past five years.

“However, this should not diminish the fact that conditions are still improving,” said CREB® chief economist Ann-Marie Lurie.

“Calgary is continuing to see slow reductions in the amount of oversupply in the market, from modest changes in demand and reductions in supply. This needs to occur before we can see more stability in prices.”

The overall unadjusted benchmark price was $416,900 in February. This is similar to last month, but nearly one per cent below last year’s levels. Overall, prices remain nearly 11 per cent below the monthly high recorded in 2014. 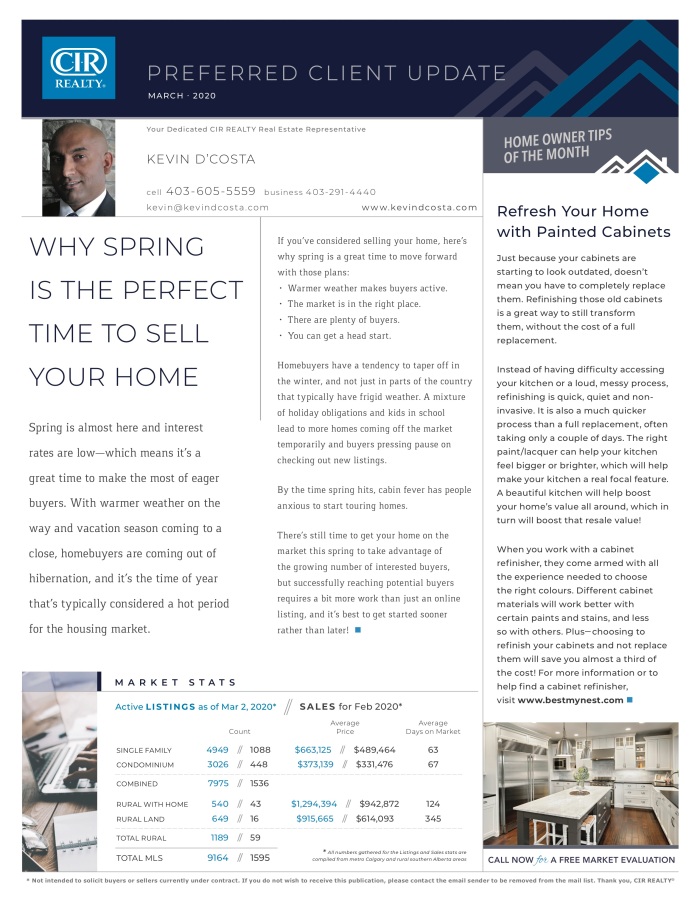 The showing activity increases have had a bit of a plateau showing a slight increase over the last week.  The markets that are being shown have shifted a bit as we are seeing a decline in showings in the starter markets, specifically the markets between $200,000 – $300,000. However there was a large improvement in the $400,000 – $500,000 range (move up market). The other price ranges have remained relatively stable while the sales have continued to climb. Year over year, CIR’s sales numbers are up 38.1% in the first two weeks of February compared to the same time period last year. That has led to an increase of 24.6% in sales year to date compared to 2019.
With the announcement yesterday that the Government is relaxing the rate that people will have to qualify under the stress test, it should help to continue the momentum in the starter markets.  As we have been discussing, keeping the starter markets going will be pertinent to the higher price points moving as well.

With the first month of 2020 behind us, we are off to a good start for the year.  Comparing the numbers of January 2020 to January 2019, we saw an increase in sales by 5.43% across the Province, a decline in new listings coming on to the market, and an overall  decrease of listing inventory which has all led to lower Months of Inventory through most of the Regions in Alberta.

While lower Months of Inventory will lead to more balanced markets and stabilized pricing, we have noticed that the properties being sold have had an increased average price of 4% in Alberta to $375,649 from $361,131 in January 2019. Since the current Months of Inventory, and the number of sales in January do not support a market where we would see significant movement in price, it is primarily due to movement in the higher price ranges that is having this effect on pricing. The 6.3% increase in the average price for sales in Edmonton, and a 4.8% increase in the average price for sales in Red Deer had a big part in that jump upwards for the Province.

The sales activity in the higher price points is consistent with the showing activity that we have had for CIR’s listings.  The month over month showings have continued to rise and we anticipate this to continue into Spring. The showing activity that has had the largest gains, is in the $500,000 to $800,000 price points, the move up markets. We have been anticipating the move up markets to start performing better as the lower price points had picked up activity in 2019.
The activity that we are seeing is closer to normal for the ten year averages, but is still a bit lower than average.  It appears that people are adjusting expectations to the “new normal”, and confidence is continuing to return to the markets. Since Alberta’s economy continues to outperform most of Canada for weekly earnings and opportunity, we are seeing the net migration into the Province continuing to increase. This has resulted in the rental markets continue to tighten, which will end up driving buyers and investors into the markets as well as help our move up markets as the first time buyers enter the market. We are also watching the unemployment rate which was seeing a drop through the Fall months of 2019, but has since started rising again in December and January.  There appears to be a lag of six months in the Real Estate markets to the employment markets, so we will continue to monitor the migration and employment trends.
-CIR Realty

A stronger second half in 2019 was enough to push annual sales up by one per cent.

“As oversupply in the market continues to ease, we should start to see more stabilization in prices. However, conditions continue to favour the buyer and this is weighing on prices.”

December unadjusted benchmark prices were $418,500. This is just slightly lower than last month and one per cent below last year’s levels.

Overall prices in 2019 declined by three per cent over last year’s levels. The total adjustment in prices is a 10 per cent decline since the 2014 slowdown in the energy sector.

While there are signs of stabilization, conditions vary significantly by location, price range and product type.

Improvements in the resale market have been mostly driven by lower priced product or areas where price declines were enough to bring more purchasers back into the market.

For more information on the 2020 housing market, the annual forecast report will be released at CREB®’s 2020 Forecast Conference & Tradeshow (www.crebforecast.com) on Jan. 14, 2020.