Skip to content
It was a tale of two markets in March!  We came out of the gates with the momentum that was building through the last half of 2019 and the first couple months of 2020.  The first two weeks of the month were well ahead of 2019’s sales numbers, and in line with the past five years trends. The last two weeks of the month told a very different story as sales and inventory levels both dropped substantially.
Even amidst the fear and the uncertainty there are bright spots within the markets. While much of the Province experienced sales drop between -4.6% (Lethbridge region) to -38.7% (Alberta West region), there were two areas that remained remarkably balanced compared to March of 2019.  The Edmonton (down -1.8%) and Central Alberta (up 1.6%)  regions both had comparable sales to the year before. Now both of those areas are trending below the five year averages, but all things considered in the World today, I would look at that as a win.
The more challenged areas are the most Northern regions of Grande Prairie (-19%) and Fort McMurray (-29.7%), as well as Alberta West (-38.7%). This is likely due to a combination of the Corvid-19 virus, and the troubles in the energy sector. The markets in Calgary and surrounding area were middle of the pack losing -9.8% in sales compared March ’19. The other very real challenge ahead is that the longer this lasts, the more likely it will become that there will be more sellers in the market that need to sell compared to buyers that need to buy. This will then offset the inventory and we will begin to see prices adjust.
The showing volume for CIR listings is a great indicator of how the markets are adjusting as we ended the month with just over 4,000 showings which is down 35% from the month before. The decline in showings continued to drop week over week until we ended with a third of what they were in the first week of the month. This tells us that the markets will continue to slow in the coming weeks. 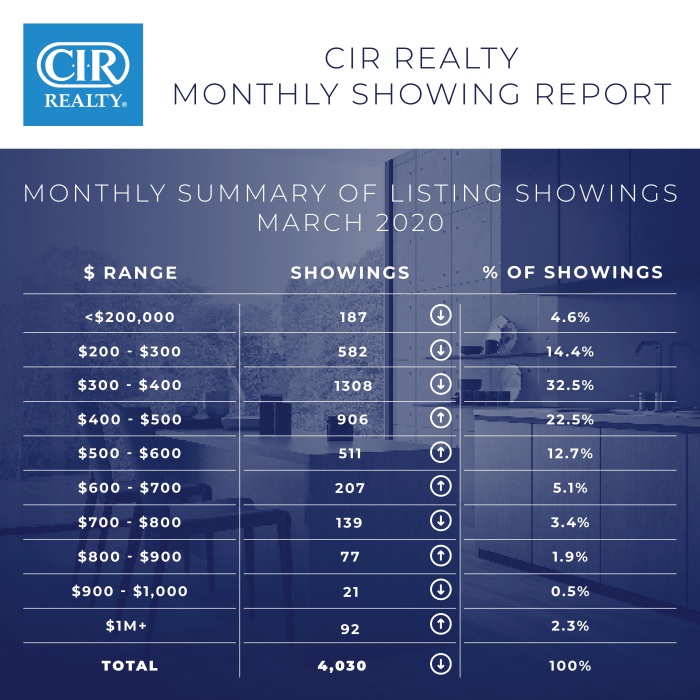